MEMBER
To be eligible as a Member the applicant must be at least 14 years of age and a male descendant through either lineal or collateral lines of a soldier, sailor, marine or member of the Revenue Cutter Service. His ancestor must have been regularly mustered and served honorably in, was honorably discharged from, or died in the service of the United States of America during the War of the Rebellion between April 12, 1861 and April 9, 1865. The applicant must never have been convicted of any infamous or heinous crime; and who has, or whose ancestors through whom membership is claimed, have never borne arms against the Government of the United States of America. 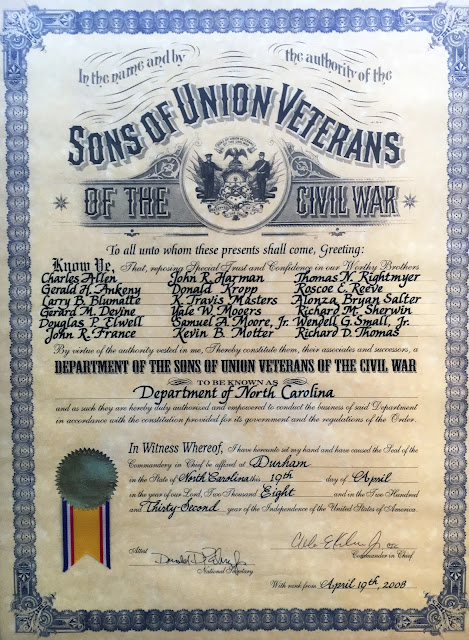 On April 19th, the Department of North Carolina’s first encampment was held at Bennett’s Place State Park. The park surrounds the Bennett family home, where Gen. Johnston’s Confederate Army surrendered to Gen. Sherman. An exact replica of the house sits on the site of the original, which burned in the early 20th century.

Prior to the arrival of the delegates, CinC Charles Kuhn, along with Chief of Staff Gene Mortorff, National Color Bearer Doug McMillin and Junior Joshua McMillin, toured the site. It was very informative and we were pleased to learn that the tour guide was also a brother of the Order.

When all delegates were registered, the meeting began in the park’s museum theater. CinC Kuhn greeted the delegates and praised the work done to bring the Department into existence. Once the officers were elected and installed, CinC Kuhn presented the charter.

The Department’s first Encampment then officially opened, bylaws were voted on, Nat. Encampment delegates were selected and proposed changes to the C&R were debated and voted on. The meeting ended with the delegates sharing the histories of their ancestors. About 4pm, all adjourned to the park’s Unity Monument for a group photo.

Thanks to Bennett’s Place State Park and the staff for allowing this historic SUVCW event to take place at the site of such significance. It was a true honor and privilege to witness. All the best is wished to the brothers of the Dept. of North Carolina as they move forward.